Video of flash and glow seen in this nuclear test

The white light acted as a giant flashbulb [Hiroshima]

Then 8:15 am struck on the clock, and the sky over Hiroshima became illuminated with a flash brighter and more powerful than the sun. A wave of heat swept through the city and back again. [Hiroshima]

As the streetcar arrived in Hatchobori, Yohko continued to watch the pedestrians hurry along on their way to work. The next moment, “I was blinded for a moment by a piercing flash of bright light, and the air filled with yellow smoke like poison gas. Momentarily, it got so dark I couldn’t see anything. There was a loud, dull, thunderous noise. [Hiroshima]

After finishing his shift at the factory, Akio Sakita returned home and went to his backyard to do the washing. He heard the drone of airplanes above, but since the air raid alarm had been called off, he assumed that the planes he saw were Japanese planes out on surveillance runs. At that moment, he heard a loud roar in the sky, and as he looked up, “wondering if it had in fact been the enemy, a blinding flash of light filled the sky and my body was showered in a wave of intense heat. I felt a searing pain in my face and threw myself on to the ground with my eyes firmly shut. The rush of heat continued for several seconds. It was like a glimpse into the horror of hell. . . . I had suffered terrible burns all over the upper half of my body. [Hiroshima]

Mr. Sumiteru Taniguchi was a sixteen year old postal carrier at the time of the bomb. He was delivering mail on his normal route in Sumiyoshi town when the atomic bomb exploded. “After the sky flashed as lightning I was thrown with a bicycle on the ground when I came to around my skin on the left arm peeled off and hung down to fingertip, my back and hips were burned and became sore and clothes nearly didn’t remain. [Nagasaki]

The Hiroshima Meteorological Observatory reported that just after the flash, black smoke rose from the ground up to the sky reaching an altitude of several thousand meters, and covered the whole city. When the fireball disappeared, the angry clouds, like grey smoke, rose and reached an altitude of 8,000 meters in 5 minutes after the explosion.

One of the Enola Gay crew recorded in his flight diary, “9:00a.m…..Clouds were observed. Altitude of 12,000 meters or more.” From a distance the cloud formation looked like a mushroom growing out of the ground, with white cloud at the top and yellowish clouds enveloping reddish-black clouds, creating a color that cannot be described as while, black, red or yellow. [Hiroshima]

At 05:29:45 local time (Mountain War Time), (11:29:45 GMT) the device exploded with an energy equivalent to around 20 kilotons of TNT (87.5 TJ). It left a crater of radioactive glass in the desert 10 feet (3 meters) deep and 1,100 ft (330 meters) wide. At the time of detonation, the surrounding mountains were illuminated brighter than daytime for one to two seconds, and the heat was reported as being as hot as an oven at the base camp. The observed colors of the illumination ranged from purple to green and eventually to white. The roar of the shock wave took 40 seconds to reach the observers.[4] The shock wave was felt over 100 miles (160 km) away, and the mushroom cloud reached 7.5 miles (12 km) in height …

In the official report on the test, General Farrell wrote, “The lighting effects beggared description. The whole country was lighted by a searing light with the intensity many times that of the midday sun. It was golden, purple, violet, gray, and blue. It lighted every peak, crevasse and ridge of the nearby mountain range with a clarity and beauty that cannot be described but must be seen to be imagined…”[7]

News reports quoted a forest ranger 150 miles (240 km) west of the site as saying he saw “a flash of fire followed by an explosion and black smoke.” A New Mexican 150 miles (240 km) north said, “The explosion lighted up the sky like the sun.” Other reports remarked that windows were rattled and the sound of the explosion could be heard up to 200 miles (320 km) away. 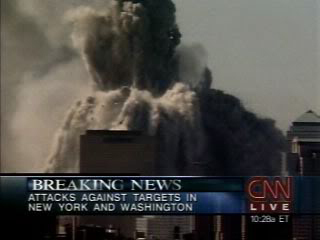 The screen is dull as the tower begins to erupt.

The screen is still dull in this phase of the eruption.

Suddenly the screen lights up to blindingly bright flash and remains bright.

White smoke at the base of WTC 1 seconds before its collapse.

Several mushroom clouds form and there is a distinct brightening of the clouds observed a couple of seconds into the collapse and the glow lasts for at least five seconds.

When the rescue team reached an area directly in front of Tower Two, Antonio said he’d take over the equipment cart Will had pushed from Building 5. … The team moved ahead. … Suddenly the hallway began to shudder as a terrible deafening roar swept over them. That’s when Will saw the giant fireball explode in the street. [bowhunter.com]

His story: He escapes from the South Tower and while he is running away, he is hit by a fireball. He is probably the last person out alive. He says he saw a fireball and heard a loud noise, and that’s all he remembers. He woke up 6 days later in St Vincents.

‘As Ron DiFrancesco ran away [from WTC 2] he was hit by a fireball … he was probably the last person out alive. “I saw the fireball and heard a loud noise. That’s all I remember…”‘

“All of a sudden I heard a roar and I saw one of the towers blow … I saw from street level as though it exploded up, a giant rolling ball of flame…” Firefighters screamed, “Run!”. She turned to run but fell. She was scooped by someone and they ran. The man slammed her into a wall and covered her with his body. She thought she was going to die. After the fireball there was a storm of debris. The smoke was so thick she couldn’t see her hand held up in front of her. She was struck by the fact that there were not many wounded people by the time she made it to safety ; she believes the reason is that the people behind her perished.

Same reporter: “I hear simultaneously this roar and see what appears to be a gigantic fireball rising up at ground level . . . I remember seeing this giant ball of fire come out of the earth as I heard this roar” [Running Toward Danger: Stories Behind the Breaking News of 9/11 – P 239]